Luxembourg, 13 February 2015 - ArcelorMittal Europe announced its results for the fourth quarter ended 31 December 2014. The segment recorded an operating profit of €122m compared with an operating loss of €396m for Q4 2013.

ArcelorMittal Europe has reported an operating profit in all four quarters of 2014, with the business realising the benefits of its cost optimisation measures, lower input costs and better margins due to improved steel market conditions and a stronger focus on new and specialised products.

Steel shipments in Q4 2014 were 9.6 million tonnes; a decrease of 2.2% compared with the previous quarter, on account of operational issues in some sites and lower exports for the quarter. Year-on-year, shipments for the fourth quarter rose as a result of improved domestic demand.

Sales in the ArcelorMittal Europe segment decreased by 1.3% to €7.2bn this quarter, compared with €7.3bn in the third quarter. This was primarily due to lower shipments.

“I am pleased to be able to report the fourth consecutive quarterly profit for ArcelorMittal Europe, as well as a 41% year-on-year increase in Ebitda. This Ebitda rise shows the expansion in our steel margins thanks to lower costs, which are the result of our cost optimisation efforts and improved market conditions.  For 2015, we are forecasting steel demand growth of 1.5 to 2.5%, for Europe, with the effects of a weak Euro and low oil prices helping to boost confidence within the Eurozone”. 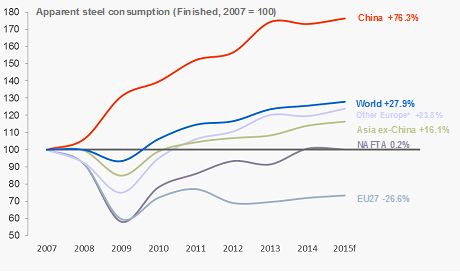 There is likely to be a pickup in European GDP in 2015 however political and economical uncertainties in the region remain. The Eurozone economic recovery has struggled to gain momentum, with the PMI index around 50 and deflation which is likely to persist for much of 2015 given the oil price outlook. However the European Central Bank’s quantitative easing measures are expected to improve confidence, to some extent offsetting deflation in the Eurozone.